The framing of Bert and Ernie

For the 2019 year’s Dutch ART-FRAME competition all participants had to make two picture frames. We had to frame the same four small screen prints and also had to frame a toy object. Both items had to be framed to conservation level.

MAKING THE PROJECT I wanted to make people smile when they looked at my picture frame, so I chose to frame Sesame Street’s Bert and Ernie in such a way that it seemed as if the cheerful, brightly coloured dolls were stepping out of the frame. To achieve this, I positioned them partly behind and partly in front of a mountboard. I started with an oval cut, light-yellow 1,5mm conservation mountboard and a black conservation suede undermount and positioned Bert and Ernie in such a way that they are ‘walking’ towards the viewer, coming out of the oval. 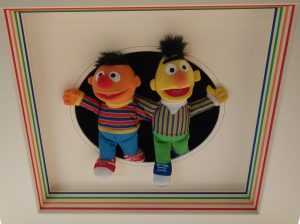 To create more depth, I drew a line around the oval with a ruling pen. To do this, I cut another larger oval and used that mount upside down as a guide for my ruling pen. Bert and Ernie were stitched to the mountboard and to each other with cotton thread. I used several layers of foamboard to fill the space between the mountboard and the undermount. 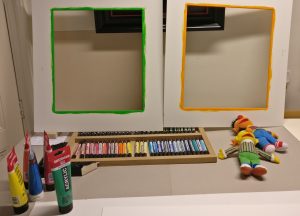 I wanted the colours of the dolls to appear in the frame so I chose several coloured mouldings. It didn’t work out the way I wanted, because the moulding colours were to dominating. Instead, I opted for an ‘over the top’ black glossy moulding which created a much better and glamourous look. Five 1,5mm light-yellow conservation mountboards were cut at 45⁰, with each aperture 3mm larger than the underlaying mountboard in such a way that one large bevel was created. I coloured the edges of the lowest four layers with acrylic paint, which I matched to the colours of the Bert and Ernie dolls. The boards were stuck together with Evacon-R conservation adhesive.  Five layers of 10mm foamboard were mounted behind them. However, again, this didn’t have the effect I expected. I started over again, placing 10mm foamboard between each layer of mountboard to create more depth. The sides of the foamboard were now covered with strips of light-yellow coloured mountboard. 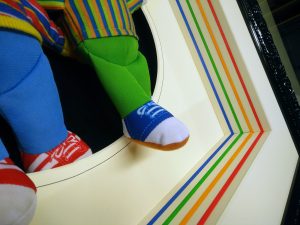 Behind the 1,5mm thick undermount, I placed a backing board of corrugated cardboard with a top layer of 0,5mm museum paper. The moulding was cut to size, glued and underpinned. All the layers were sealed together with gummed-paper tape and 99% anti-reflective UV Clarity glass was used for the glazing. The rebate height of the moulding was far too small for the thick sandwich, so I extended it with 9mm MDF, built up to a depth of 80mm. The MDF was then painted black in several layers. The package was mounted into the frame with framer’s points and sealed with gummed-paper tape. A water repellent board was stapled at the back of the frame. This is the Dutch way to finish the back: it is an extra barrier against dust and insect, further protection for the artwork and adds extra strength to the frame – especially for smaller mouldings. Finally, two heavy duty hangers were screwed to the back of the frame and felt bumpers attached. 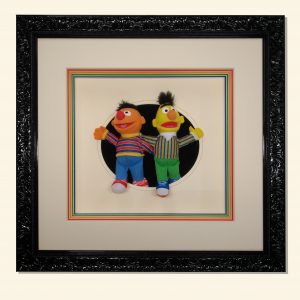